PHOTO: Apparently Boise State's 2011 Pro Combat Uniform Is Out Too

Share All sharing options for: PHOTO: Apparently Boise State's 2011 Pro Combat Uniform Is Out Too

Update: These were way off! The actual uniforms are pretty badass, if you like horses of Apocalypse dressed up like Scarface. Some people aren't into that.

You've seen the Georgia Bulldogs' Nike Pro Combat costume for their game against the Boise St. Broncos. You've marveled, recoiled, adjusted and now sort of like parts of it. I really like the helmet. But have you seen Boise State's? Here it is, via SoleCollector.com via UniWatch: 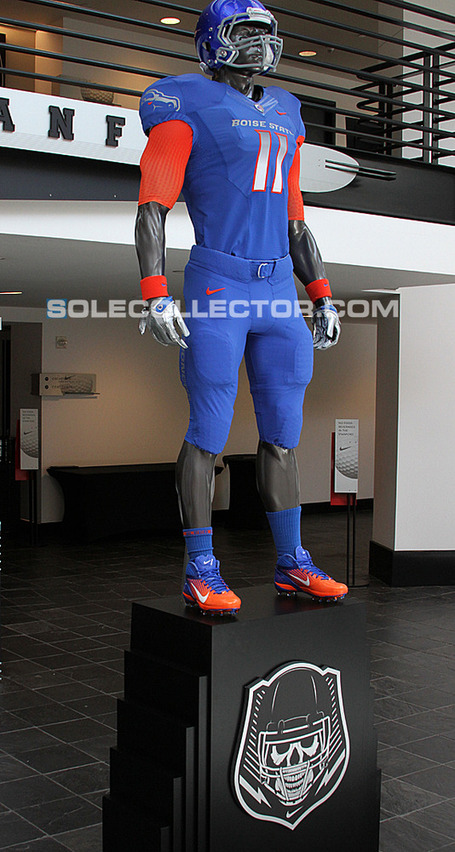 So, yeah, Nike pretty much gave Georgia and Boise State the same uniform, only with different helmets. The texture around the collar, the shoes, the monochrome jumpsuit and lack of stripes ... from the looks of things, Oregon's is pretty similar too. I don't think any others are out yet.

That's pretty strange, isn't it? What if the only distinguishing things about each college football team's uniform were helmets, shoulders and color schemes? CTRL+C, CTRL+V and Paint Bucket?

We speak too soon, and should wait until we see the dramatic, aggressive and futuristic stylings worn by Ohio State and Army before judging the entire process.

For more on the Chick-fil-A game, head to Dawg Sports and One Bronco Nation Under God.