Let's get this out of the way first: you're about to read the worst idea in the history of ideas. It may be such a bad idea that its badness predates ideas and is worse than the stuff our sub-primate ancestors did. Are you ready?

NASCAR Nationwide Series driver Brian Scott, a Boise, Idaho native, will drive a car decked out in Boise St. Broncos blue and orange in Atlanta, Georgia on Sept. 3. The night of Boise State's Chick-fil-A game in the Georgia Dome against the Georgia Bulldogs.

Son, I don't think they're going to let you paint the track blue. 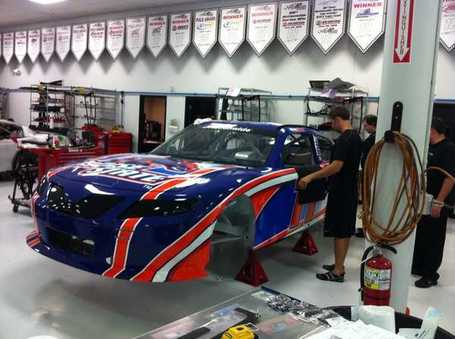 This car's entry in the lesser race could steer (steer!) attention away from the offending vehicle, but man. There are still going to be some UGA fans in the stands for that race, and they're going to be checking the score of the football game. If things start to go sideways for the Dawgs, somebody should probably just go ahead and insist Scott parks it and calls it a night.

At least it's for a good cause:

The tie-in is an outgrowth of his sponsorship with the Albertson Foundation and its "Go On" campaign to promote college attendance by Idaho high school graduates.