When last we took Nike at their word about a Pro Combat getup, we ended up with a gruesome vision of Vince Dooley's hindquarters being bolted to the heads of teenagers as Erk Russell's life force spilled onto the battlefield. Horrendous!

After getting a look at the Revelations 6:8-meets-The Clipse all-white uniforms Boise State is wearing to the Dome, aren't you a little nervous to hear the thinking behind this one? Here we go:

Claiming blue collar while very clearly wearing a white collar, a collar so white that everything about you is white: this makes you a politician, not a football player. Kellen Moore, you are not old enough to run for governor in the state of Georgia, though 30 Rock's Stone Mountain may have an available office. 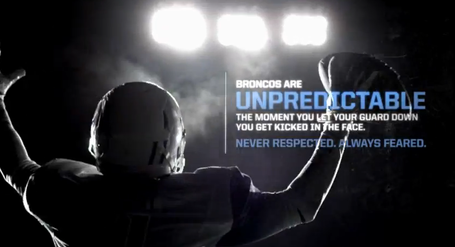 For more on the Chick-fil-A game, head to Dawg Sports and One Bronco Nation Under God.