If bloggers hate everything, why should SEC football be any exception? Steven Godfrey complains about this weekend's slate in Speed Country. Complete national TV schedule here, if you're into leaving the SEC.

Hey everybody, games of some minor impact not fabricated solely to drive television ratings and sell $200 tickets to a NFL stadium!

Week two of the SEC march is marginally more respectable than Labor Day weekend, as identifiable conference football games are now present and permitted to be played on college campuses. In 2045, this will be known as "campus week," wherein Hugh Jackman's robot athletes will leave their shopping mall home arenas to hold scrimmages in the rotting husks of once historic "campus stadiums." I know I made the football-games-in-shopping-malls-in-the-future joke last week, but that's only because it's far more of a palpable eventuality than paying for things with your organs or any of that Phillip K Dick dystopian nonsense.

(*Missing from this and every week's breakdown will be any SEC canoodling with the FCS. How you spend your dirty money is your own business, gentlemen, but we'll have no part in asking those fragile creatures to dress up like dolls and submit to such unspeakable acts.)

Don't Watch This: Did anyone see Randall Cobb last night?

That's what Kentucky football does with dynamic playmakers - dick. "Well, clearly he was overshadowed in a conference of so many great..." Oh, eat me: Anyone capable of spin button Shakespeare exaggarated to the heights of a Street Fighter 2 combo could steal more than a headline or two from the signature paint-drying expressionism of Mark Ingram, Alabama running back robot. We've only got three times as many reporters covering this conference than all of Capital Hill, not too mention scores of self deluded "professional bloggers" such as moi. We didn't "miss" anything, except that Kentucky football is the back alley abortion of the SEC's pro player development process.

Bonus inside joke for nerdcore readers. Now just imagine him abbreviating the names of his enemies.

Don't Watch This: Miami football, a loose federation of hedonism and hubris blind enough to indavertantly fund stripper abortions, walked away from a meeting with head coaching candidate Dan Mullen convinced he was "too cocky" to coach the Hurricanes. So why are we touting the building clout of a potential despot of despots? You know when comic books run out of ideas, and the villain teams up with the good guy because an unthinkably more powerful yet lazily constructed, plot hole riddled mega-villain is looming over the fair planet? Yeah, do that, rest of the SEC. The devourer of all smug looms.

Don't Watch This: Well, thank the crew cut F-250 version of Jesus Christ, the TV liberals are set to finally showcase two programs SENSIBLE ENOUGH to not meddle with sissy uniform combinations! While your dad sits in calm reassurance that nary a trace amount of helmet decals or piping will sully this contest ("Now, let's talk about that forward passing business, ya commie tank riders!"), choke down national punditry propping this game up as anything more than a recent BCS Champion beating the shit out of a team that's low-end MAC levels of threatening by comparison. Let's categorize such annoyances as "wishful media bias" in the wake of permanently shifted national demographics. Come Sunday morning we'll realize what an abuse of college football history this one-and-one was, and how Nick Saban is an asshole.

Clip is unrelated, but my editors told me to break up all the text. So enjoy Cincinnati's finest export this side of flavorless chili - Afghan Whigs!

Don't Watch This: Did you know that a large majority of the midwest considers Cincinnati to be "Southern"? Did you know (spoiler: you do) that we consider Cincinnati and any Kentucky county bordering Ohio to be as Yankee as a Nantucket clam bake celebrating a denomination-free wedding on a Friday night? And if Cincy is the orphan child amidst warring collegiate cultures, where would that leave the Bearcats if the SEC took West Virginia? I can tell you where it would leave the Vols: Having to trim an inch off those cutoffs and prop up that cleavage, because nobody pays attention to the second-most offensive piece of mountain trash at the bar.

Don't Watch This: We spend six months of the offseason foaming about this game, and then it's totally forgotten by the first week of November. If you aren't a fan of one of these programs, you can't possible tell me what happened last year. Try doing it.  Fun fact! Did you know both the Cocks and Dogs play throwaway games this November (The Citadel and New Mexico State, respectively)? SO PLAY THOSE SHIT GAMES NOW, MORONS. You're absolutely ruining our pointless conjecture. NASCAR scheduling is not a blueprint to dynasty building, South Carolina, unless you like opening all your presents on Christmas Eve with the rest of the white trash from the electric guitar church in the mall.

Don't Watch This: It stands to reason that hindsight, foresight or even base logic are woefully absent from the ongoing super-conference realignment chatter. Consequently a perfect storm is moments from converging around The Shroud of the Ozarks just above northwest Arkansas, a region renowned for such an dearth of perspective. What with their genetic inferiority to Texas (most Hog fans 50-plus prattle deliriously about their "rivalry" with the Longhorns, like a Walker Percy character opining about Confederate glory), if the SEC were simply to stage a false undefeated season for Arkansas - we could have them play Troy in a mock title game in Shreveport, just nobody say anything, OK? - we could incite the Hogs to declare UT-ish independence, neatly replace them with Texas A&M, detonate all bridges entering or exiting West Memphis and everyone's a winner.

Nah, you're cool, Arkansas. This is just a proposal, just spitballing here. 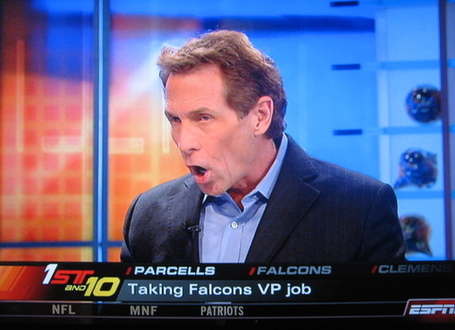 Don't Watch This: None of us will pay attention to Florida. Florida will prance merrily through their standard early season exhibitions - The Sun Belt's Florida Atlantic, C-USA's UAB and uh, Tennessee (Ohio Valley Conference membership pending). No. 15 Florida (4-0) will lose by 28 to Alabama in October. National columnists and Fox's NFL pundits moonlighting on college coverage will jabber "SEE, THIS IS WHY EARLY SEASON POLLS ARE WORTHLESS!" to which we'll reply, "Uh, hey, they have a brand new coaching staff and weren't even picked to win their division. Did you know that?" To which Mike Golic will simply scream out "FLORIDA!," and resume with his coloring book.

Don't Watch This: If anyone quips that games like these "would be great if this were basketball season!" you're within your rights to inflict bodily harm (eschew cliche violence and pick a "mushy" part of the face... besides those sports take FOREVER to heal). There is no such thing as a "(particular sports) school." Florida and Texas and Oklahoma and the Butch Davis Bay of Pigs have taught us that college sports operate with manifest destiny, so the only reason your program hasn't alternated national titles between revenue producing sports is because your self righteous academics are clouding a necessary white-hot lust for inflating an athletic department's operating budget. Besides, this isn't basketball season, asshole. That's why I'm not weeping in the rain.