Morgantown, W. Va. - Humbly submitted to the Regents of SEC message boards league-wide, are my five strongest arguments supporting West Virginia University's nomination to our fair conference after a weekend I'd proudly certify as conference-esque in its revelry. Remember people, Missouri is no man's solution.

1. They Have A Roller Coaster On Campus, So We Could Really Stop This List Right Here Every single direction to any location in Morgantown includes the phrase "go over the hill," which isn't even tourist-fun for a day, let alone an undergraduate's tenure. So to connect satellite campuses and spit in the face of topography, WVU has A ROLLER COASTER!!! (tram system) THAT FLIES DOWN AND AROUND!! (banks somewhat noticeably) 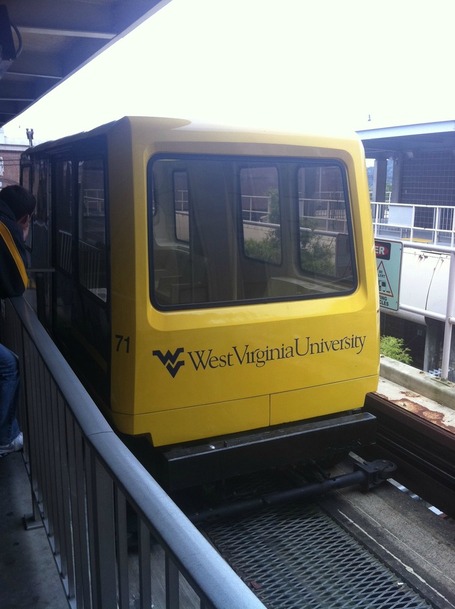 My first assumption is that the combination of these single unit "Personal Rapid Transit" cars and an undergraduate population would create a mad libs of antics: "Dude, I (verbed) (noun) in the PRT with (co-ed) and then (verbed) all the way across campus!"

Regrettably, most LSU fans weren't aware of the PRT (free to all on all WVU home game Saturdays!) until too close to game time, but once they'd processed the potential of live hillbilly Cinemax on a light rail, you could see most of them react as if the Soviets just took the lead in the space race.

2. Appreciated Laziness In Other Revenue Generating Sports While I didn't personally visit the site, the conditions of Hawley Field, the 'Neers baseball stadium, was labeled as "absolute bullshit" by my co-pilot Pod Katt, of And The Valley Shook fame. 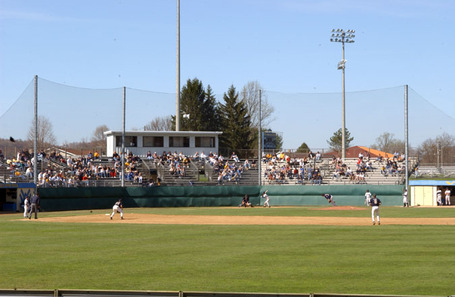 When posed to a tailgating former WVU walk-on linebacker who asked to remain anonymous, he said that WVU has "no interest and no money" in Mountaineer baseball, which is music to the ears of most SEC West fans in desperate need of extra conference wins after baseball powerhouse Texas A&M is now in the fold among LSU, Arkansas, Ole Miss, Florida, Vandy and back-to-back national champion South Carolina.

"We can beat everybody in the SEC in basketball, even Kentucky sometimes. But we don't even recruit out-of-state for baseball players. Where are you going to play? In the snow, or Gainesville?"

Unrelated, but noteable: the walk-on personally witnessed Rich Rodriguez burst into tears after the 2007 WVU loss to Pitt that knocked the Mountaineers out of the BCS title game.

Me: How was that?

Walk-On: He was such a bitch. Now he won't even come back to the city because he thinks we'll burn his house down. 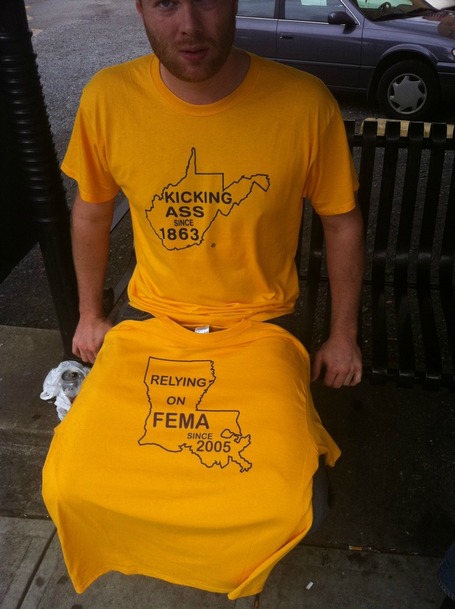 Me: Wow. How are those selling?

Guy Who Made The Shirt, Who Is 100 Percent Not Me, So Stop E-mailing: Awesome, bro.

Me: You ever been to Louisiana?

Me: Can I take your picture for, uh... the Internet?

Guy: (pauses) I'm only giving you my first name.

4. Alcohol Poisoning Is An All-Inclusive Experience Facilities are always a concern when competing nationally. West Virginia has an indoor practice facility, sure, but they also boast the attraction of imbibing illegal spirits, committing felony harassment and having your stomach pumped all in the same parking lot. Budget out some shit to compete with that, Jeremy Foley. 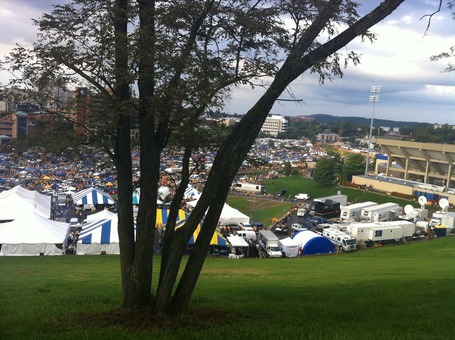 See that? That's a tree in the way of me trying to make a point with a crappy iPhone camera. It's also the 'Eeers' Milan Puskar Stadium on the far right, and, across a sea of gold be-jersey'd tailgaters, the looming facade of Ruby Memorial Hospital, the largest facility of its kind in Morgantown. The massive complex towers over the pregame festivities like a brick and mortar responsible older sibling, always seeming to say "You know better, but I'll be here to hold your hair back in six hours anyway."

Maybe the demands of expansion forced the state's largest university to place a 24-hour emergency medical facility mere feet from the heart of WVU tailgating purely out of coincidence. But wiser fans know it's because this is the heart of moonshine country, and, as chronicled by Spencer Hall, our travelling party was lucky enough to stumble across and stumble away cheerily from "Red Corn," supplied by a suspiciously well-spoken, thoughtful local who was dressed entirely in yellow and drinking moonshine. 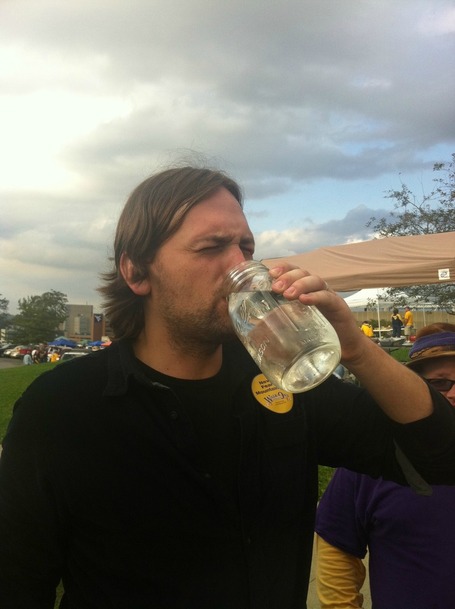 5. Morgantown's Really, Really Remote Location And Questionable Loyalties During The Civil War Will Make Arkansas Feel Less Like A Shitty Brother-In-Law Make no mistake, West Virginia is not in the southeastern United States, be it geographically, politically, socially or in the record books - WVU fans will always hate Pittsburgh as an equal and a neighbor, and not with the simple blanket loathing of Yankee culture we warm ourselves with south of I-40. A lot of 'Neer fans are prone to rip on the state capital of Charleston as "redneck." That's because they're from New Jersey. Lots of them.

We drove to this game - Katt all the way from New Iberia, Louisiana, picking me up in Nashville along the way, and it's really, really far away. The grousing among traditionalists about the distance needed to travel for a softball game between Auburn and WVU is a very real concern, but so is the inevitability of growth in college athletics and the unrecognized, impolite truth that this is the SEC, and we don't care a goddamn bit what the sotfball team has to do if it increases football revenue.