The Georgia Bulldogs had a solid morning, picking up commitments from five-star linebacker Josh Harvey-Clemons and turning four-star defensive end Josh Dawson from the Vanderbilt Commodores. One big announcement remains: Palm Beach Gardens offensive lineman Avery Young, who's rated as the nation's No. 9 tackle by Rivals.

He's set to announce UGA, Florida, Auburn or Miami at 2 p.m. ET on ESPNU, but we might already have a pretty good idea of where he's going, depending on how we interpret his profile page on UGA's official website: 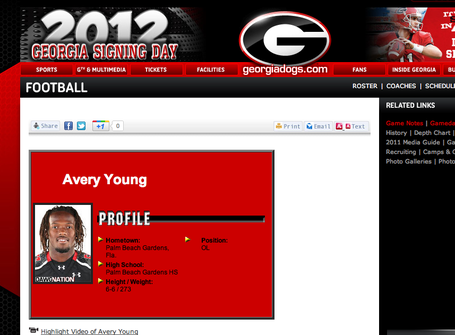 That's no guarantee, of course, as it could just be some page that was set up to show to Young during a recruiting visit. That sort of thing does happen. It could also be an eager intern just getting things ready and assuming nobody would find it. But this is SEC recruiting, friend, and everybody always finds everything.

Let's think of it as a good sign for the time being.

For more on the parties involved, visit SB Nation's many college football blogs. Click the link for more on National Signing Day 2012.