UPDATE: Various individuals on Twitter are claiming Choice auctions autographed gloves for a charity called Helping Hands. Jared Dudley of the Phoenix Suns, for one, passes along the memo. I can't find anything on Google about this charity, but if that's the case, disregard almost everything below, as my heart is clearly three sizes too small.

UPDATE II: Choice says it's for his nephew. Reopen the snarkgates! 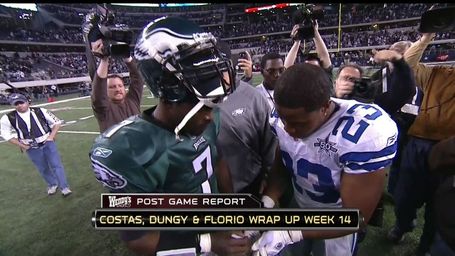 Choice will always be one of my favorite players, and props to him for playing his way out of Dallas' doghouse and putting together a 100-yard game last week, but come on son. The pair may have met when Vick played for the Atlanta Falcons, which overlapped with Choice's career at Tech. Getting an autograph then would've been one thing, but asking for it while playing on the same level? On the field? After a loss? To a division rival?

This is too much. Let's reflect on better days: