For teams playing in the pre-New Years bowls, players usually spend Christmas on the road and away from their families. This year, I am sure that Rod and Angel Jones were thrilled when the Independence Bowl announced its participants. You see, they have four children: Theo, Taylor, Darius, and Roddy. Darius is a running back for Air Force, and Roddy is an a-back for Georgia Tech.

Darius is a sophomore. Like his brother Roddy, he played his high school football in Atlanta at Chamblee High School. He is 5'9" and weighs 160 pounds. In his freshman season, he got 12 carries for 56 yards and scored a touchdown. This season, he has rushed the ball 8 times for 73 yards.

Roddy is finishing up his redshirt junior season. In his three years at Tech, he has had 184 carries for 1371 yards, an impressive 7.5 yards per carry. He broke onto the scene in 2008 when he tallied 214 rushing yards against rival Georgia, helping to break a long losing streak to the Bulldogs. Like his younger brother, he too is 5'9", but weighs in at 202 pounds.

So what is tomorrow going to be like for Mr. and Mrs. Jones? The pair will be found in the first half in the Air Force section, and will move to the Georgia Tech side after halftime. As for what they will be wearing, they already have their wardrobe picked out: 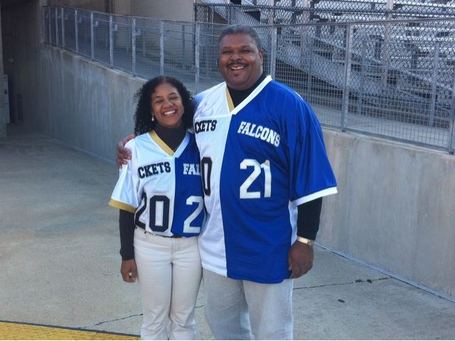 Tomorrow will be very memorable for both of the brothers and their parents as well.