Oh, come on; how is Georgia Tech supposed to compete against a service academy decked out in the colors of Ol' Glory? The Air Force Falcons are taking the field in alternate red, white, and blue uniforms, at least one of which features the word FREEDOM on the name plate. Can't tell if they all say FREEDOM, or if each player is dubbed with a noun from a set a la South Carolina's and Utah's Wounded Warrior Project unis. 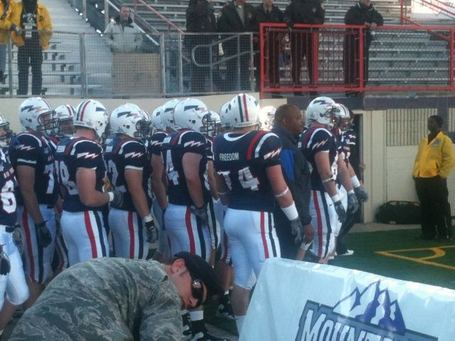 The Falcons have tended to be the swaggest of the three FBS academy teams -- even with Army going camo -- at one point sporting star-spangled helmets to boot. Tech is countering with its all-whites, having learned its lesson about wearing special bowl uniforms after its mustard-blues contributed to a Chick Fil A Bowl loss to LSU and last year's Orange Bowl arrow'd duds didn't help much against Iowa.