Series history: Tech leads 21-8, and has gone 8-3 on Deacon turf. The Jackets haven't lost in Winston-Salem in over a decade.

The two teams' most famous matchup was also the most unwatchable ACC Championship Game ever played, which is saying something.

Entering the 2006 conference title game, Tech was visibly deflated from a 15-12 loss to Georgia in which Tashard Choice ran for 151 yards from scrimmage but Reggie Ball went 6-of-22 with two picks. Calvin Johnson was held to two catches, the second-worst game of his three-year Tech career. 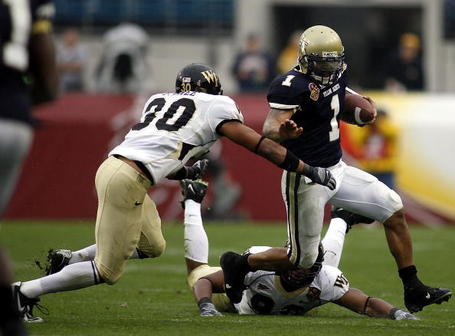 Megatron bounced back against Wake, catching all but 12 of the Jackets' 129 passing yards, but the rest of the offense didn't. Allow From The Rumble Seat to elaborate:

Nix was ready to leave Georgia Tech and most likely had his offer from Miami in the mail as he haphazardly called deep bombs and halfback draws in one of the worst offensive efforts of the 2000's.

Georgia Tech fans realized that Pat Nix had truly fooled them for five years. Nix, in fact, was an agent sent from Auburn University to destroy Georgia Tech's chances at ACC glory. In a rainy, cold Jacksonville crapfest, Tech only scored 2 field goals. The offense averaged almost 27 points per ACC contest. The defense only gave up 3 field goals. Pat Nix is very fortunate he got a job with Miami because he was about to be fired.

A defense powered by Calvin Johnson and Tashard Choice mustered six points against Wake Forest, with championship rings on the line. To this day the game's 9-6 final score functions as a shorthand for ACC title game fail.

Last meeting: Down by three in overtime, Paul Johnson called for Joshua Nesbitt to attempt a fourth-down conversion. If he converted, Tech would go to 7-1 in the ACC with a game against Duke the following week. If he didn't make it, Miami would have a chance to take the division, as they held the head-to-head tiebreaker.

We'd been standing since the middle of the second quarter, when a dubious chop block penalty negated a 60-yard end-around touchdown by Stephen Hill and necessitated half an hour of booing, but I had to sit. "This is the conference," I kept muttering with my hands on my head, forgetting for a moment the conference's 9-6 heritage. 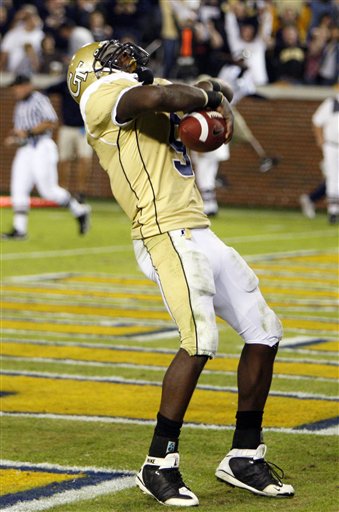