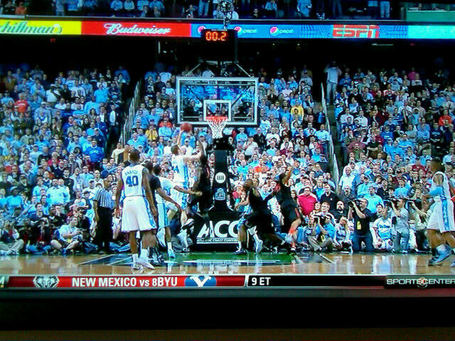 The North Carolina Tar Heels just completed their second double-digit comeback against the Miami Hurricanes this season, rallying from 19 down to top the Canes on the last play of the game. The winning shot by Tyler Zeller gave UNC their first lead of the game, in fact.

Zeller had 13 points in the game, and those might've been the simplest two. Though certainly pressure-packed, of course -- a last-second surprise layup opportunity is never a guarantee, as Utah Jazz fans can attest. Miami trotted out a weird strategy during the Heels final possession, electing to repeatedly use non-bonus fouls to halt the inbound recipient. The strategy limited UNC's opportunity to setup an offense, but also added a note of frenzy that likely benefited Zeller.

It took a Miami collapse and a ridiculous UNC run keep the fated title game showdown between the Heels and Duke Blue Devils alive, but there it is. Might as well just embrace it.