Virginia Tech came back to beat Florida State, 52-51, to advance to a game away from the ACC Tournament final. FSU led by as many as 10 just before halftime, with the Hokies pulling within one late in the second half and a tie with just under two minutes to go. With four seconds left, Erick Green drilled a jumper from just inside the three-point line to give Tech the edge.

FSU responded with a buzzer-beater that would've given FSU the win -- had it actually beaten the buzzer. (Updated ACC tourney bracket below all this.) 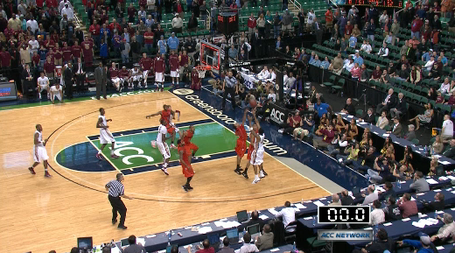 The shot was reviewed, and the Hokies were declared the winners.

Duke awaits the victors in Saturday's semifinals. The Blue Devils may have been pulling for FSU, having already lost once to Virginia Tech this season -- and that was with a full-strength Nolan Smith. Duke beat the Noles 66-61 in Tallahassee in their only encounter this season. Can the Hokies make it two out of three?