First, new Miami Hurricanes football coach Al Golden may be the ACC's most intense man. Evidence. So slapping up a poster with imposing Michael Irvin quotes to and fro throughout the offices today is probably about the most chill activity he'll get up to today. Second, what is it with football coaches hanging up really weird stuff in their facilities this week? 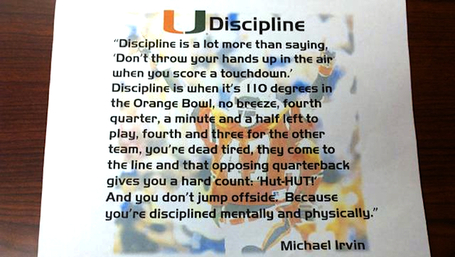 Irvin was a great player, and has a lot of really great things to say about football and life these days. But he's been arrested at least three times and was part of the barnstormin' 1980s Miami teams that laid the groundwork for the program's crowning achievement, its incredible 1991 Cotton Bowl performance, in which the Canes produced 202 yards worth of penalties in a single game.

None of these things suggest "discipline" in the traditional sense, so shouldn't we get all huffy about Miami using his image like this?

Whatever. Irvin doesn't get arrested all that much these days, is a Pro Football Hall of Famer with a very visible day job, and readily acknowledges the mistakes of his past. Let Al Golden do Al Golden, y'all.