Share All sharing options for: PHOTO: Miami's 2002 Rose Bowl Brought To You By Depressing War Movie

The Miami Hurricanes weren't an ACC team yet in 2001, but it would behoove any fan of a team afflicted with ACC membership to go ahead and try to claim them anyway, as I'm pretty sure that team could've beaten the 2010 Carolina Panthers. Football Study Hall looked back on Butch Davis' masterpiece Saturday, including gruesome, spectacular video of their entire national championship demolition of the Nebraska Cornhuskers.

I say all that to say this: early 2002 in the United States was a really, really weird time. Four months after 9/11, it apparently made total sense for GENERIC KEYS TO THE GAME ("Stop the option," since your opponent runs the option) to be brought to you by historically sketchy movies in which a dozen or so whitewashed American soldiers and scads of dehumanized Somalis die really horrible deaths. 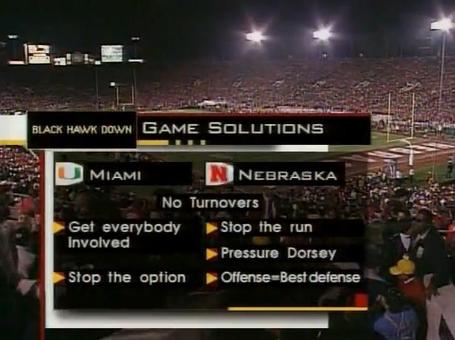 Then again, maybe that was the perfect sponsor for this game, because my goodness the carnage. Andre Johnson hurls Husker, Ken Dorsey windmills ball as far as he can, Kellen Winslow destroys kick returner, Eric Crouch gets consumed. Repeat.