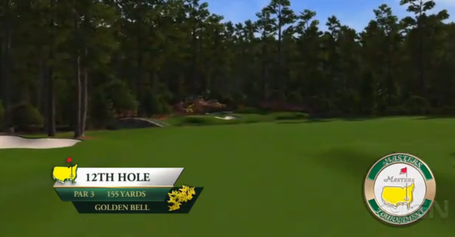 Tiger Woods PGA Tour 12: The Masters is available today for PS3 and XBox 360 and so forth, though Bubba Watson has already been playing it for hours now. Here's a complete list of courses included in the game. This year marks Watson's first inclusion as a character in the series, but its biggest selling point is a slightly bigger Georgia golf icon: Augusta National Golf Club, which had also never been featured in an EA Sports golf game. Here's a video of the game's version of the course:

The Atlanta Athletic Club, which will host the 2011 PGA Championship at its Highlands Course, is another new addition, while Bobby Jones' home course, East Lake Golf Club, makes the cut (GOLF TERM) again. There's also an Augusta Par 3 course, meaning four of 17 courses are based on Georgia clubs.

EA has made a big deal of laser-scanning Augusta for maximum accuracy. I can't imagine how that could've possibly been necessary, but it's nice to know they care that much.