Vaughn Williams made his formal debut as Kennesaw State's new athletic director at a Tuesday press conference. Though the webcast was immediately preceded by hold music that concluded with the Frank Sinatra song "Love and Marriage," which was the theme from Married ... With Children, everything else turned out pretty well. 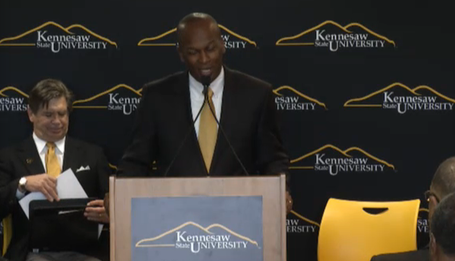 His first words: "I love the black and gold." That'll work. After running through his resume and his excitement at taking the job (mentioning his kids have acquired every book on KSU athletics they can find -- there are books?), Williams summed up the theme of his mission with a meditation on the word opportunity. He said Kennesaw State can compete, while repeatedly stressing academic achievement.

When asked about his priorities, he started with men's basketball coaching, describing the right candidate as an academics man and preferring a quick timeline. He said he'll begin building trust around the community and campus by meeting students at Wednesday's baseball game.

He teared up while talking about his wife, joking that he practiced his speech about her six times. Apparently he lived in Atlanta at one point, adding that he prefers 100-degree heat to snow. He comes across as a soft-spoken family man. I think I like him so far.

Before Williams was brought out, his integrity and focus on academics were touted as reasons he stood out in a "pool of candidates that was very deep and very wide" and included more than 100 applicants. President Daniel Papp big-up'd Vince Dooley, who was present in the room, and noted the school's timing in announcing Williams the day after his former school's basketball team won the national title.