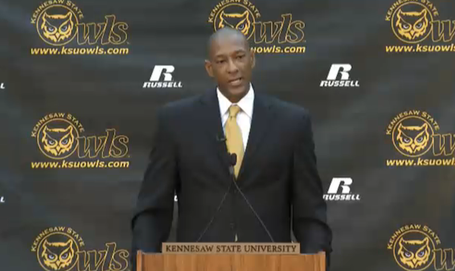 Lewis Preston was officially introduced as Kennesaw State Owls basketball coach at a Tuesday morning press conference in KSU's campus arena. First, new athletic director Vaughn Williams was praised by a man with an unbelievably deep voice for completing his first big task during his time in metro Atlanta: the hiring of a new hoops coach.

Williams touted Preston as a great building block for Owl athletics "in the Atlantic Sun and beyond" and said KSU called "everyone in the basketball world" to find the team's new coach. He listed Preston's experience in multiple power conferences and as an assistant to big-name coaches. Williams stressed Preston's good reputation among colleagues.

Kennesaw State's musical struggles at press conferences continue, as Preston was brought out to "Y'all Ready For This?" of Jock Jams fame. Come on, Owls.

While thanking people, Preston mentioned he didn't start playing hoops until his high school's coach pulled him out of the marching band as a senior and put him on the floor. He thanked Notre Dame Fighting Irish coach Mike Bray for teaching him leadership, Florida Gators coach Billy Donovan for schooling him in X's and O'x and skill development, and Penn St. Nittany Lions coach Ed DeChellis for stressing program-building.

He turned to address his players, promising they're about to start working so hard they'll shake their heads at their new coach, but assured them "cutting down nets" is the end result.

"I'm looking forward to being a great example," he said, "Throughout this state." He described the university as if it's one with an athletic department just rarin' to go.

A fan asked Preston about his offensive philosophy, complaining about a "stagnant" offense in recent years. Preston said he never wants to be a part of another 36-34 Big Ten game, claiming his team will push the ball up and down the floor and work in the paint.

He was asked about being the coach of the school's flagship program until football kicks off. He said he's found success at football schools in his career and is looking forward to developing relationships and dealing with new challenges.

When asked about scheduling, he mentioned his relationships with new Georgia St. Panthers coach Ron Hunter and new Georgia Tech Yellow Jackets coach Brian Gregory while talking about potential natural rivalries in Georgia and beyond.

He discussed recruiting in Atlanta, saying he has one "maybe two" scholarships for next year and that he's looking to interview assistant coaches "later this week" with ties to Atlanta recruiting. He called Atlanta a hotbed, but also listed Tennessee and Alabama as potential recruiting grounds.