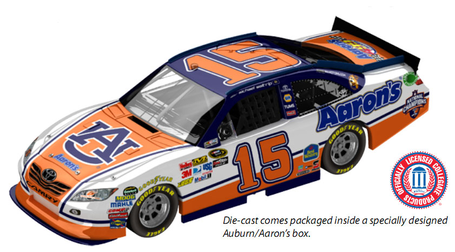 Michael Waltrip will race in an Auburn Tigers-themed Toyota Camry at the Aaron's 499 in Talladega, the Birmingham News reports. The NASCAR Sprint Cup race is set for April 17. You can buy a die-cast replica here for about $75, if you'd like.

The paint job is meant to commemorate Auburn's 2011 BCS National Championship win, meaning he'll have to purchase a copy of Photoshop to go back and change his Talladega color scheme once them HBO alphabet boys finish their dark work. So many punchlines to choose from! Jeff Gluck went for the Mississippi State angle, always a welcome activity.

You could also wonder whether this may have been Grant Theft Auburn's getaway car, this is the car Stanley McClover bought after trading in his Impala, Nick Fairley will attempt to wreck this car from behind, Gene Chizik will call Waltrip's car in for energy devampirization, pit crew chief Trooper Taylor will be employed to towel off its windows, and so on and so forth.

Who currently wears No. 15 for Auburn? Clint Moseley and Neiko Thorpe, according to last year's roster.