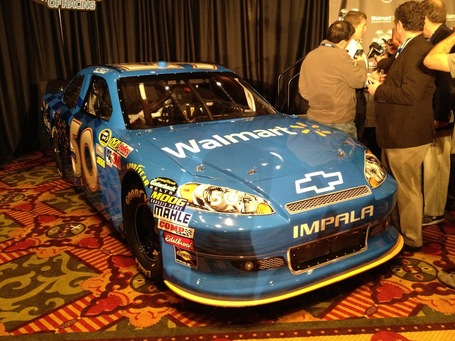 Walmart, celebrating it's 50th anniversary in 2012, will sponsor Dawsonville's Bill Elliott at the July 7 Coke Zero 400 at the Daytona International Speedway. Turner Motorsports will field the car, carrying No. 50 and powered by Hendrick engines.

Elliott finished 12th in last year's Daytona 500, driving for James Finch. It was one of only five races the NASCAR legend drove in 2011, his lowest total since he debuted on the top-tier circuit in 1976. He has not recorded a top-10 finish since placing ninth in the 2004 Brickyard 400, in his first year of semi-retirement, but his record of 44 victories makes him a certain Hall of Famer once he finally ends his driving days altogether.

In addition to announcing its partnership with Elliott, Walmart announced it will again offer ticket packages for a number of Sprint Cup events this season, including the Advocare 500 at the Atlanta Motor Speedway on Labor Day Weekend. The package features four tickets and a voucher for four hot dogs, four Coca-Cola products, and a souvineer program.