So nice of the Winnipeg Jets to have named themselves in honor of the world's busiest airport. Can't think of any other reason why a small town in mid-Canada would give itself such a name, if not in honor or of Delta and AirTran. You can click to make these bigger: 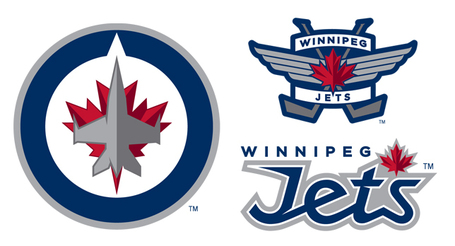 I kind of like the upper-right one, but don't get why hockey logos always include hockey equipment. This one leaves no doubt; rarely is hockey equipment in a hockey logo rendered redundant, but there are already maple leaves everywhere.

Whatever it is this new logo is meant to reflect if not Atlanta's airport, it was leaked a few hours before being revealed, giving everyone a chance to prepare for the team not going with the old Jets logo, which didn't have a helpful jet on it. So go buy a bunch of stuff.

No telling what the new uniforms look like yet, but they'll probably draw fewer complaints than the Thrashers' did.